While we still have our grand rail stations in America - Grand Central, Union (Chicago and Los Angeles), we would seem to have nothing like the above ground zeppelin hangar vastness of some of the great European rail portals.  So it is with Budapest's Keleti Station.

Even in the midst of a journey of one's own, how peaceful it is to wander into such a barn of existential possibility.   To sit on a bench adjacent to one of the platforms as if to board some train to a nearby suburb or far-flung city.  To be still among all the slightly feverish coming and going.  Until you are reminded that you have not had a proper meal yet this day and it is high time you go and find a cheeseburger. 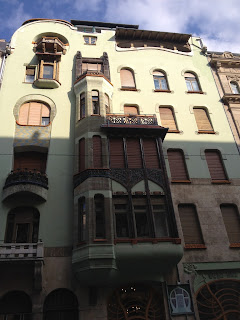 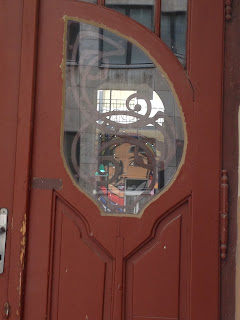 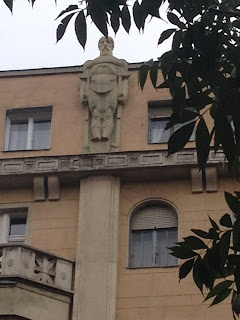 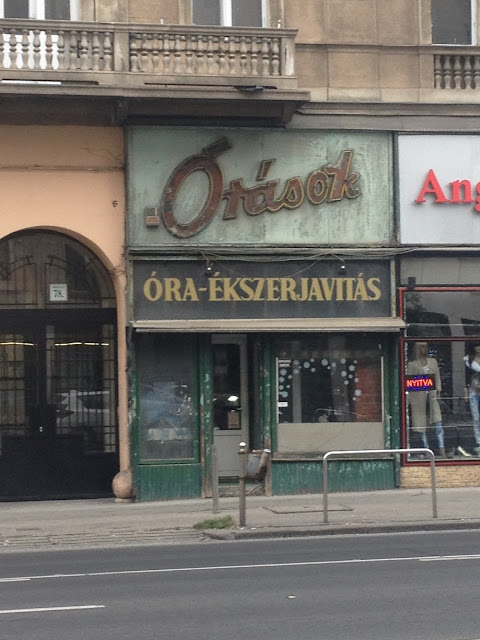 A lazy afternoon seems not out of place with the light if insistent rain.  But with the evening, the conversation must continue.  A panini restaurant along the Danube in Ujlipotvaros.
And then the Budapest Jazz Club.  As at the Liszt, you understand not one word of the patter from the female singer, who's clearly either the beloved of the guitarist or seems eager to assume the role.  But when most of the songs begin, the lyrics are in English.  Even more than the words, you feel that the music flows imperfectly in an American language, arguably THE American language, jazz.  The river formed at the confluence of the European and the African musical traditions.  You know this language and you have heard it spoken much more eloquently, with much more insistent originality.  But you don't exactly require Charlie Parker or John Coltrane, Dinah Washington or Sarah Vaughan, at the height of their powers.  It's all pleasing enough, from the somewhat surprising arrangement of the Miles Davis by way of George Gershwin's "Summertime," to the lovely, surprising rendition of Radiohead's "High and Dry."

And can there be many more evocative experiences than a tram ride by night through an unfamiliar city - the lights, the weathered or the shining faces of these unknown buildings, the people about you in the tram car and wondering after the particular pathos of their existence? 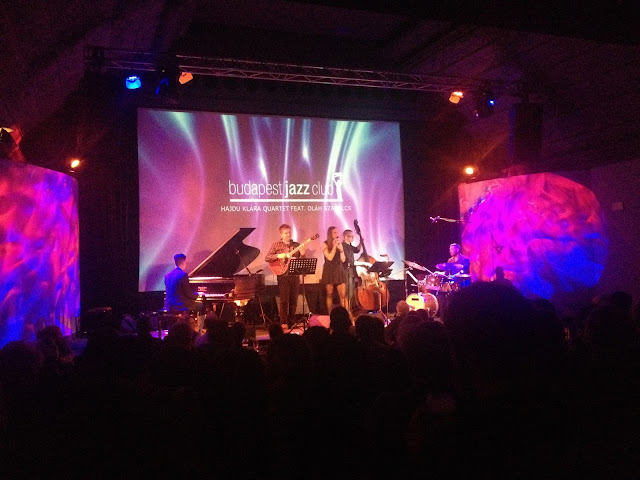 
A particularly curious time to walk amongst Soviet kitsch when Russia is exerting an increasingly malicious influence on world affairs.  But the lure of Soviet Statuary and grand socialist gesture is fairly irresistible.  And the trip to Memento Park, southwest of the city center, is a minor adventure in itself, a relay of Metro and regional buses.

The park is really about a half hour's work, even if you choose to check out (beyond all the looming statuary) the "barrack" across the road with its exhibit on the 1956 Revolution, carried out and suffered mainly by the very young of Budapest, as well as that cinematic classic, Life Of An Agent, about secret police training methods in Hungary (lots of useful information about breaking into flats and gathering damning information).

Back at the ticket office, adjacent to the well-abused Trabant, the "peoples' car," you ask the woman behind the the counter if all the Soviet martial tunes that play in a constant flow of ironic political muzak drive her crazy.  Yes, she acknowledges, they do. 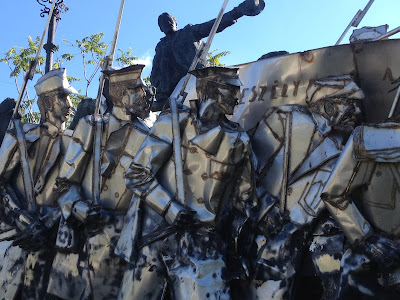 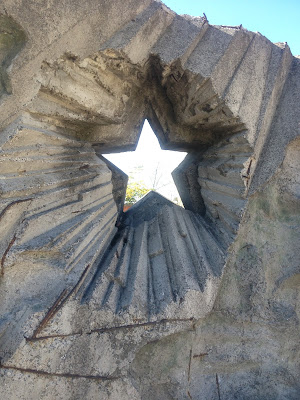 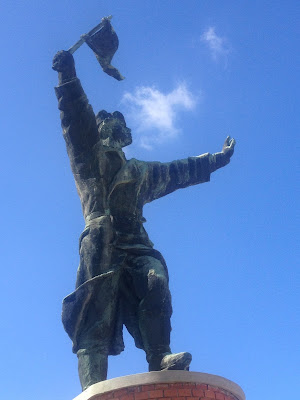 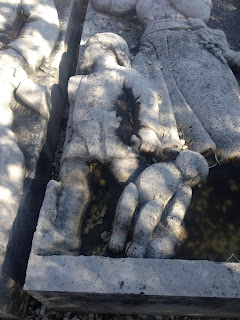 Afternoon's gentility:  grand cafe and then cocktails at the Gresham Palace (now the Four Seasons). 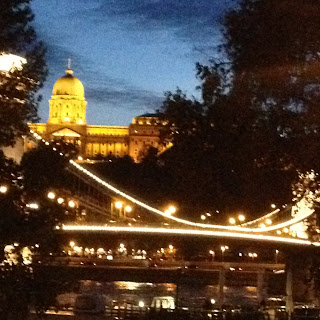 It didn't seem possible that you could face a Thursday in Budapest with less sleep than had been the case for its predecessors.  And yet...with possibly two hours of sleep to your credit you have arrived, sadly, at your last day in the city.   And like the alien nights, this is no time for sleep.

Into Buda and the Buda Hills!  To be refreshed by the autumnal air and abundant verdancy!  To submit, willingly, to some tourist ritual and partake of the area's charming variety of conveyance:  the Cog-wheel Railway, the Children's Railway and then a chair lift down.  But alas, the Cog-wheel Railway (officially, Budapest tram #60 for those keeping score at home) is out of operation for a few days.  You first assay the 3.75 km climb by foot and until your tired body and not at all amused and somewhat asthmatic lungs say, "I don't think so."  Actually, during your brief slog uphill along the single track of the Cog-wheel Railway, a car stops abreast and the older couple would seem to offer you a ride.  But in your tired diffidence, you wave them off and slap shoe soles back downhill.

Well, Plan B.  The Napraforgo utca modernist houses, a dash of Buda Bauhaus.  This turns out to be a pretty good schlep in its own right, though mercifully over Chicago-flat terrain.  And there is much of that Buda verdancy for which you have made this trip.  The walk along Szillagyi Erzabet fasor is a kind of fall idyll.  And amid this suburban ease you feel the tug of autumns immemorial, the season with perhaps the greatest undertow of opiate nostalgia.  Here too, school children free from their day's labors, chattering in their way, eagerly affixing themselves to small groups.  The illusion that it has always been thus and will always be. 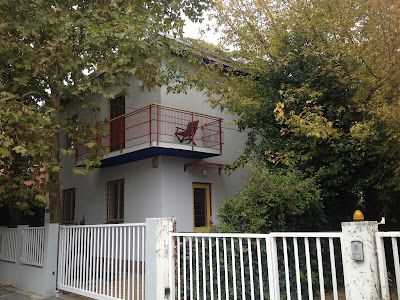 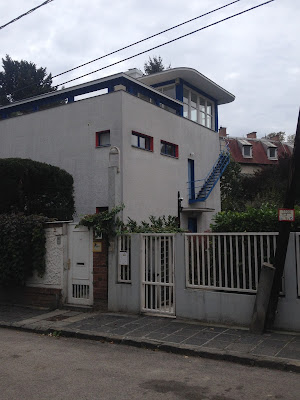 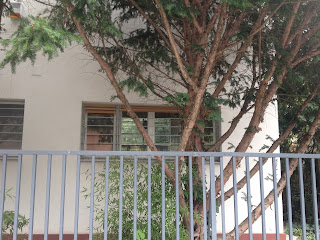 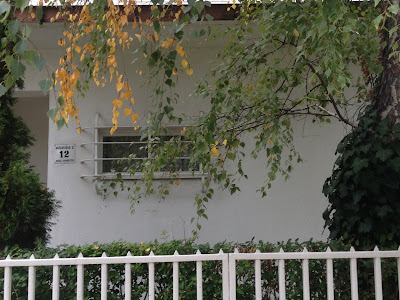 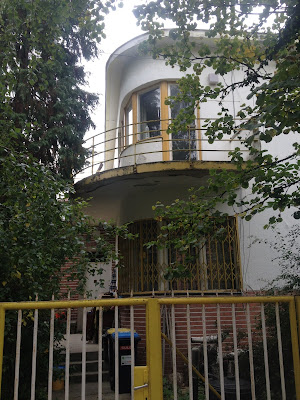 Time in a foreign city, a different city than one's own, can truly be a fling.  A heady fuck the consequences, 'let's do this thing" that leaves you spent and a little sad, all the more so for how well it all went.  And then it's almost time to say goodbye.  And it's quite tempting to do this preemptively, to recede into one's self defensively before it is quite necessary to do so.  But no, despite the dark descending early and heavily into one's Erzsebetvaros courtyard, the night must be assayed, the relationship that has formed must be honored, the last dance must be allowed its time and place, valse triste though it may be.

Back to the grand Urania then.  Down Dom utca, happening Erzsebetvaros seems surprisingly quiet this Thursday night.  But when you turn toward the busy thoroughfare that is  Rakoczi ut, you see that here, as in an American city, especially any college town, the young are out and hiving about favored bars on a Thursday night, getting a jump on the weekend ahead.

Where the throngs are not is at the Urania National Films theater, where you have arrived for a screening of The Beguiled.  When you go upstairs to the theater cafe, you have it to yourself until a young couple take their places at a table on the other side of the spacious room.  Scarcely a half dozen take seats in the auditorium for the screening.

All of Sofia Coppola's films (we have not seen The Bling Ring) concern themselves, to one degree or another, with birds confined to their gilded cages.  It seems that one of the criticisms of Coppola's most recent film is that it pretty well ignores the pain and politics of The Civil War.  But that is largely the point.  Beautifully, consistently spectral, whether within its plantation setting or among the mists and swoony vegetation of the Louisiana location, The Beguiled shows us a kind of husbandry perverse and run amok.  Social ritual and repressed sexuality rotting on the vine.  It actually seems of a piece with Ms. Coppola's father's portion of Apocalypse Now, that similarly spectral interval at the French plantation in the depths of Vietnam, equally rotting, incongruous and oblivious to its greater context.

Back out into the streets of Erzsebetvaros, past all the bars, some fairly bereft, others magnets of youthful attention.  Their city and their time.  Let us say goodbye without too much ceremony.  Everything that has needed to be said has been said.  Goodnight Budapest.