Oh, adolescence.  It can be such a dark, difficult time.  Particularly if you’re the unfortunate India Stoker (Mia Wasikowska).  Not only does she bear a surname which provides rhyming fodder for the menacing jocks who lurk outside her high school.  But not long into Stoker, the young woman finds out that her beloved father has died in his SUV in a mysterious accident.  Fast upon that shock, the father’s heretofore unseen brother, the mysterious Uncle Charlie (Matthew Goode) shows up after the funeral and quickly ingratiates himself with India’s not-terribly-mournful mother, Evelyn (Nicole Kidman), very much to the chagrin of the melancholy child.

Lest this begin to sound like a contemporary, female Hamlet - dad barely dead and mom getting cozy with the creepy uncle almost before the body's cold -  first-time screenwriter Wentworth Miller has cited Hitchcock and not Shakespeare as a major influence, or at least jumping off point, in the composition of his screenplay for Stoker (the title itself apparently an homage to the author of Dracula).  Specifically, it’s Hitchcock’s 1943 film, Shadow of a Doubt that shares some common, albeit superficial ground with Stoker.  The earlier film also has its own disturbing Uncle Charlie, with Joseph Cotton so effectively playing against type as a serial killer hiding with his sister’s family in an idyllic version of  Santa Rosa, California, where he enjoys a strong bond with his niece, Charlotte (who also goes by the name Charlie).

Beyond the mad Uncles Charlie and the bonds that exist between the men and their nieces, there’s no great debt owed to Hitchcock (and screenwriters, that included Thornton Wilder for Shadow of a Doubt) by Stoker and its author.  There is certainly very little resemblance.  Stoker plays more like a morbid, overheated young adult novel, as if Stephenie Meyer had gotten sick of writing about vampires and instead had concocted a story of a pallorous young woman who finds herself drawn to the dark figure of a handsome but clearly dangerous uncle.

Mr. Miller's screenplay does not bother explaining significant points in its plot and provides only vague indicators of character.  Such occurrences as a daddy long legs traipsing up the leg of India and out of sight beneath her skirt without provoking any reaction supposed to be, one presumes, illustrative of some gloomy, perverse back room of the young soul.  As for the mother whose touch India cannot bear, the lonely Evelyn was and is jealous of the relationship between her daughter and departed husband, which flashbacks would suggest consisted mainly of  hunting trips, with father and daughter lying in tall grass, ready to fire upon some unsuspecting bird or other, reminders of which populate the Stoker estate in the form of creatures frozen in taxidermy.  And really, what pale, bookish, young woman doesn't like to blast animals with a rifle?  But as for India's mom and dad, there's absolutely nothing to indicate why Mrs. Stoker so quickly and blindly welcomes her late husband's very assertive, if rather handsome brother.

The grasping after mood and style by Wentworth Miller's story and dialog is matched, sadly, by the direction of Hollywood newcomer Park Chan-wook.  Mr. Miller (better known to this point as an actor, one of the co-stars of the television series Prison Break) at least has the excuse of being a first-timer.  The same cannot be said for Mr. Chan-wook, whose ticket to Los Angeles was probably punched on the acclaim afforded his stylish, violent "Vengeance Trilogy."

Park Chan-wook has actually been writing and directing films for twenty years, but you wouldn't necessarily know it by Stoker.  There are certainly flourishes of style, but no sense of an overall vision of what this is all about.  There is a good bit of the dramatic framing for which the director is apparently famous, and while the compositions are often rich enough in color and feature the stark posing of one or two characters - some assemblage of the India-Evelyn-Charlie triangle - it all has the effect of a man who repeatedly, theatrically clears his voice, only to have nothing at all to say.  Even at its best, the director's framing, given the story with which he's working, is like so much gilt around Dogs Playing Poker.  Or perhaps, Dogs Staging a Dopey, Morbid Play.  There's some early jump cutting, some artful wipes here and there, all of which come and go in Stoker almost arbitrarily.  Mr. Chan-wook through this first American feature acts like a kid a little too excited to be playing with toys at someone else's house, when he's probably got the same stuff  at home.

To have seen Cary Fukunaga's Jane Eyre (2011), is to realize what a dubious accomplishment is Stoker, rendering Mia Wasikowska so vague and uninteresting as India.  There's little sign of the intelligence and spirit with which Ms. Wasikowska brought Charlotte Bronte's heroine so vitally into the 21st century.  Mainly, we see India lurking about the Stoker house or grounds, eyes dilated and blank of expression, as if over-medicated.

Also sporting, as it were, eyes wide shut, is the versatile Matthew Goode.  Disparate roles in films like The Lookout (2007), A Single Man (2009) and Leap Year (2010)  have demonstrated his ability to be much more than the suave Englishman that probably is not a great stretch.  But he's pretty well neutralized in Stoker, despite frequently regarding India or Evelyn with eyes so full and gleaming you would think that Bausch & Lomb had come out with a Beelzebub line of contact lenses, of which Uncle Charlie enthusiastically bought a lifetime supply. 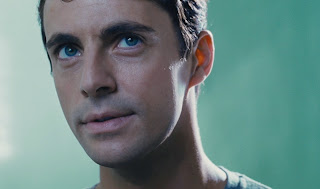 Only the intelligent and lithe acting of Nicole Kidman keeps her red hair above water, and only barely, swimming upstream against Stoker's dumb, insistent current.

A forgettable YA novel adapted for the screen Stoker could well be.  But it does actually seem a man's take on the story.  Of course, murky connections exist in our complex minds between eros and other more blatantly destructive forces.  And the adolescent mind is no stranger to any such darkness.  But this particular young woman's story, with its mix of saddle shoes and virginal primness alongside the penchant for violence, its shower scene in which India gets off while flashing back (in two versions) to her near-rape by a schoolmate, Whip (really) and violent rescue Uncle by Charlie with ensues, seems especially a man's imagining.  However well or ill placed  the intentions of screenwriter Wentworth Miller and director Park Chan-wook, Stoker is hard to take seriously from any point of view.  Only when India and Charlie Stoker begin to drift toward couplehood, does the film begin to hint at anything really dark and original.  But like many a screenplay these days, there seems a desire to both shock and win favor from the audience within the same script, conflicting sentiments that make for muddled storytelling.  Instead, we are returned to the film's first image, India standing on legs planted firmly apart, rifle in hand, blasting away.  It's a motif that Mr. Chan-wook seems to enjoy.

A weekend that ended disappointingly with a screening of Stoker also included Rebecca Daly's 2011 film,  The Other Side of Sleep.  It's another story about a haunted young woman, set in the decidedly non-picturesque environs of a small Irish town.  The film's sleepwalking protagonist is troubled not only by her own family tragedy, but by the knowledge that she awakens one morning next to a murdered young woman from the area.  As Ms. Daly literally follows her main character around, often in the dark, the story is rife with possibility for cheap shocks and directorial indulgence.  But Daly is a model of restraint. As a result, there is an integrity of story and the sort of tension that a film like Stoker doesn't begin to approach.  Ms. Daly also elicits a performance both fierce and vulnerable from  Antonia Campbell-Hughes in a role in which she betrays little emotion, has very little dialog to speak.  See The Other Side of Sleep.  Watch Shadow of a Doubt, or watch it again (as I did this week).  As for Stoker, best to stay out its arbitrary, self-indulgent line of fire.