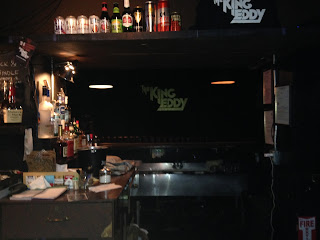 You buy a "Tap" card and proceed down into the Hollywood/Western Metro station.  And you can't help thinking that sardined New York commuters would swoon to have this much room as they go about their rounds about Manhattan.

Yes, it's all quite tidy and comfortable as you take the Red Line downtown, emerging into the gentle light of early evening at Pershing Square.  You walk down 5th street, a gentle serpentine through the homeless, or those that would appear to be homeless, lingering or drifting on the sidewalk.  Like them, you gape briefly at the requisite film shoot taking place in an alley of the north side of the street.  And then, across Main Street and into Skid Row - in Los Angeles, this is actually a legally defined area.  Despite the city's decades-long attempts to clear the inhabitants of Skid Row like so much rubbish, a homeless population in the thousands persists.  But where sanitizing government has failed, economics might well succeed.  Downtown is gentrifying.  And hell hath no fury like a real estate developer hungry for a new deal.

The King Eddy Saloon opens in its way onto 5th along the western verge of the neighborhood.  There's been a bar on the spot for about a century.  When prohibition arrived, the bar went underground in the form of a speakeasy (connected by tunnels for the sake of delivery to other parts of downtown; the L.A. Police were apparently in on the business).  When the 21st Amendment was ratified in 1933, the bar came back upstairs and his been serving drinks almost constantly since.

As a sign of changing times, the King Eddy was sold a few years ago (in a rare embrace of the literal and ironic, the purchasing company was called ACME).  You can't say what the joint looked like in days of yore, but the barroom - even with the door propped open - is a fairly dark, low-ceilinged cave of a place.  Beyond the door ajar, there's only one window that admits of sunlight or an outside world.  You assume the stylized name of the bar stenciled on the wall opposite you is probably one of the products of the upgrade.  Branding, you know.

But of this Wednesday, The King Eddy has all the makings of a dive.  Except maybe the divers.  Appropriately, there are just three or four us to keep the bartender company.  But we're a little too carefree, even for men drinking in the relative dark.  The guy a few bar stools down restlessly gets up a few times and stalks out to the sidewalk.  But he's far too harmless to be up to anything interesting.  In its seedier days and with a more downtrodden clientele, the bar was apparently a major drug-selling location, the bathrooms serving as drop off/pick up points.  But let's not get too nostalgic about that.  The King Eddy is simply a good place to have a drink in the hush of early evening.

Back up the slight hill of 5th, you're back to Broadway after a few blocks.  Broadway once the center of the city that now seems to sprawl center-less (not necessarily a bad thing).  If you fancy old theaters, Broadway is something of a gaper's heaven, thick with grand palaces and smaller 30s and 40s (by which time the city's moviegoing center of gravity had been relocated to Hollywood, where Sid Graumann built his Chinese and Egyptian Theaters in the 1920s) houses.  You're bound for a place somewhere between the extremes, the Palace Theater.

The Palace dates all the way back to 1911, explaining its relative intimacy.   Even in the balcony, you feel close to the stage and screen.  These details quite pertinent for what was originally a vaudeville house without a sound system, the Palace the oldest remaining theater from the Orpheum vaudeville circuit. The grand old place is abuzz tonight as  the Los Angeles Convservancy is hosting a screening, part of its Last Remaining Seats, which has been going on for about 30 years, screening films in these downtown theaters in which one can usually not gain access at all.  Part of the thrill is not just the venue, but the film.  Tonight, it's a decidedly obscure Cuban film called La muerte de un burocrata (Death of a Bureaucrat).  As you road trip around the country to check old theaters where films are still screened, you're usually confined to the most thunderous and lowest common denominator of commercial fare.  There's only so many times you can see Captain America:  The Winter Soldier without making a drinking game out of the experience.

But we excited movie goers and city slickers are here for some real culture tonight.  Whether that's going to include a film becomes a mater of some doubt as the preliminaries prove rather lengthy.   The head of the Conservancy making her remarks, thanks the sponsors, etc.  She hands off to someone else.  He, in turn, fulsomely introduces a music writer, dressed to the nines, who's going to introduce the film. The music writer clearly enjoys the spotlight and proceeds to ramble in what he clearly thinks is an entertaining manner.  He introduces, not the film, but a California guitarist who favors us with tunes from the man who composed the film's score, Leo Brouwer.  Very nice stuff, but you've had a long day, which has included all manner of roaming, another film and several beers.  Then the music writer returns to trod the boards with relish.  The word interminable comes to mind.  At long fucking last, some 45 minutes after the appointed time, the film begins. Ah, but the cinema (quoting one of one's favorite poets, Rosemary Tonks).  The film, by Tomas Gutierrez Alea, is worth the wait.  Gutierrez, apparently loyal to Cuban Socialism during his life and film career, but frequently pointing out its absurdities and shortcomings, from Death of a Bureaucrat (though hardly his first film) to Fresa y Chocolate (Strawberry and Chocolate), his penultimate film, that got some distribution in the U.S. (as did his Memories of Underdevelopment (1968).  While Gutierrez may have been part of a larger Latin American movement in cinema that eschewed the glitz of Hollywood, Death of a Bureaucrat is surprisingly polished with no apparent lack of production value.  And for its obvious and affectionate nods to film comedy that preceded it (Harold Lloyd, Laurel and Hardy, Buster Keaton), Gutierrez's film hums with considerable and original energy.

Regarding the fairly silly, "pastoral" murals along the side walls of the auditorium as you sprawl across a couple of balcony seats (you've got the Jimmy legs in addition to the general weariness), you think this is a pretty satisfying way to end the long day in Los Angeles.  This even as you reflect upon the likely reversal (which becomes actual within days) of U.S. policy toward Cuba.  The American president will say that Cuba's been benefiting too much from the relative openness of the previous few years.  Hang tough, brothers and sisters to the south.  I'd like to say that your lot will improve someday when your existence is no longer so directly determined by chest thumping men, regardless of political stripe.  But I'm afraid you'll fare even worse when the real estate developers are set loose. 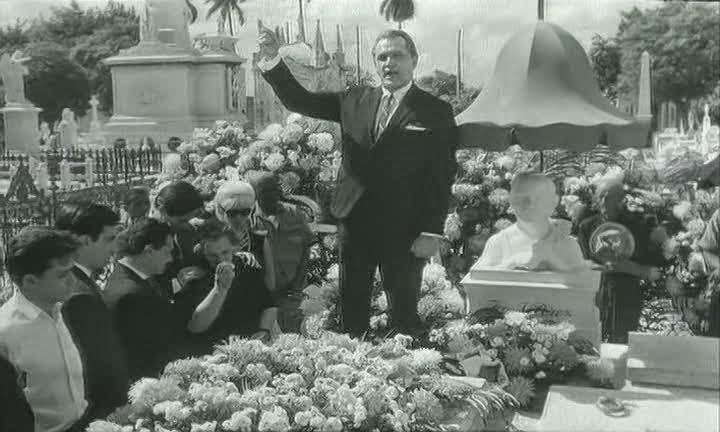