Apparently, he's a pitbull.  Usually gentle, cute in his way perhaps, but not to be crossed.  This Brookyn bartender Bob Saginowski (Tom Hardy) as conceived by writer Dennis Lehane in The Drop.  Mr. Lehane sets up a rather simplistic case of nature versus nurture in a harsh, twilight Brooklyn where it's tough going for dog and man alike.

The Drop is notable as the final work of actor James Gandolfini.   He plays Bob's cousin Marv, which happens to be the name on the front of the bar he has long operated in a Brookyn neighborhood which shows no signs of gentrification.  But as The Drop begins, we find out that Cousin Marv's is Marv's in name only.  He was muscled out of ownership some eight years previous and is now beholden to Chechen gangsters.  At the outset, speaking in an adopted accent, Hardy as the soft-spoken Bob explains that many such bars are used as drops for bag men, all the city's dirty money funneling into slots and fake kegs, ultimately finding its way to the sort of people who tolerate nothing going astray.

In what seems a particularly elegaic performance, Gandofini is grave as the weary, embittered and compromised Marv.  Marv's foolhardy plan to cross the Chechens sets the plot of The Drop in motion.  Pressed for money from both the criminal and nominally legitimate overlords of his world (the collection agency which threatens to ship his vegetative father off to a lesser nursing home if he can't catch up with his bills) Marv finally decides to push back.  The film is ultimately Hardy's to carry, just the mess that Marv creates is ultimately left for the deceptively simple Bob to clean up.  We find that he's more than up to the grim task.

There's a lot of deception going on in The Drop, initiated by the desperate Marv, as well as the slow revelation of character on the part of screenwriter Lehane, adopting his short story "Animal Rescue."  This unveiling of nuance and back story is more credible among the secondary characters like Marv and a menacing local, Eric Deeds (Matthias Schoenarts), than with Bob and Nadia (Noomi Rapace). Nadia (Noomi Rapace) is a neighborhood woman whom Bob meets when he finds a wounded and abandoned dog in her trash can.  It seems eminently clear from this first meeting, that the battered animal will bring together these wounded souls, even as the skittish Nadia takes a photo of Bob's license in a kind of safety Instagram, sending it to four friends, which she makes clear to Hardy's character before she allows him to follow her into the house so they can tend to the hurting puppy. The cute fellow, whom eventually receives the name Rocco, is actually a pit pull,  When Nadia - a waitress who used to work in an animal rescue organization - corrects Bob's misidentification of the dog as a boxer, he recoils somewhat and earnestly proclaims the cultural bias about the ill-used breed.  This a case of Bob being conveniently simple.  No need to punish the dog because his owner was a dick, Nadia says, scratching the puppy's floppy, grey ears.  Bob is able to resist neither Rocco, nor Nadia.


Ms. Rapace has had her Scandinavian blonde hair dyed black to play Nadia, just as Hardy's relatively fair has has been darkened to accompany a light beard, further highlighting his already prominent lips and nose.  Both actors look well enough like the second or third generation Eastern or Southern Europeans they're supposed to be.  The Drop at the very least looks authentic, from its characters to building interiors (particularly the lived-in Cousin Marv's; someone did some good location scouting), even if the action takes place in a portion of Brooklyn that the sun seems only rarely to find. 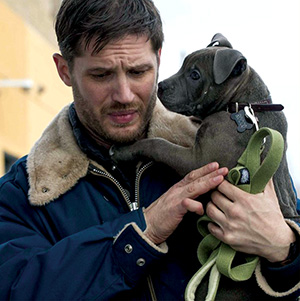 The details in The Drop, the particulars of people and place of the film's overcast Brooklyn, are frequently credible enough, or at least compelling enough to suspend disbelief.  So it goes with the soft tones and accent of Bob.  This just another tune from the rich instrument that is the voice of Englishman Tom Hardy.  For a man of his relative size and presence, Hardy has proven more a chameleon than one might imagine possible, particularly with his voice.  This is the same actor who trumpeted the pronouncements of the indomitable Bane in The Dark Night Rises, croaked out the limited verbiage of the almost comically unkillable Forrest Bondurant in Lawless and fairly expectorated the blustering philosophy of the titular prison inmate in Bronson.  Hardy's Brooklyn inflection might not be the accent of any of the multitude of accents actually heard in New York's most populous borough, but his voice and generally troubled mien are the least problematic aspects of his character.

Both feature-length films of Belgian Michael R. Loskam have had at their center a kind of innocent lumbering around in the formidable shell of a man, trying to navigate subcultures of violence and gangsterism.  Given its European setting and provenance, perhaps it's not surprising that the protagonist in his Bullhead (2011) is a less approachable character whose story plays out far more darkly than Brooklyn Bob in The Drop.

Both Bullhead and The Drop draw us into the lonely lives of their main characters.  Unfortunately, Mr. Loskam undercuts himself in each case with pondering shots of these innocents amid encroaching darkness.  In Bullehead, this takes the form of the clunking mechanism of flashbacks in which we find out that the troubled bulk of Jacky Vanmarsenille is not exactly what he appears to be at first or even second glance.  The film ends with another ill-advised return to innocence, lest we fail to grasp the pathos which has already been well established.  Loskam concludes The Drop with a similar shot, this time of man and dog on the sidewalk of Nadia, tongues figuratively wagging, asking to be let in out of the cold.

Director Loskam squeezes the story and camera, as it were, too tightly at one of The Drop's most crucial and ultimately unlikely moments.  But one's enjoyment of The Drop will depend most on how readily can be accepted the very contradictory character that is Bob Saginowski, as written by Dennis Lehane.  At least Mr. Lehane demonstrates the relative grace of using something other than the death or abduction of children (as was the case in Mystic River, Gone Baby Gone and Shutter Island) for the dramatic thrust of this most recent story of his set to film.  His attempt rehabilitate the reputation of the pit bull is also rare and laudable.  But much as he sprinkles details in the story to hint at the violent potential of Bob - as the quiet man expertly wraps a severed arm that had been delivered to the bar in a bag with bloodied currency, cousin Marv gruffly notes that it looks like he's done it a thousand times before - it seems a case of a criminal trying too hard to establish an alibi to cover a botched crime.  This man as drawn by Lehane strains credibility.  That he would be taken back by Nadia after she witnessed Bob at his most violent, even more so.

The lingering sadness of The Drop is the realization that it's the last time we'll see James Gandolfini in a new role.  There are more obvious ways to celebrate his legacy, as his magnetic work all those years as Tony Soprano.  But to stay within the realm of the motion picture without leaving the shadowy world of violent men, check out Andrew Dominik's for more accomplished Killing Them Softly (2012).