"What are we gonna do after we graduate?" Well, yes. Welcome, young lovers, to the first in an increasingly challenging set of existential conundrums, as you leave the anything-is-still-possible world of college and set out into the rather more limiting world beyond. The beneath the covers question is posed by Jacob (Anton Yelchin) to his British girlfriend Anna (Felicity Jones), as the two face each other in bed, a blanket thrown over them like a common skin, prime bits of their actual young flesh visible and hinted at.

Like Crazy suggests the intoxication of young love but concerns itself mainly with the sobering impediments to romance that fill the adult world like so much bulky, ill-placed furniture with which one collides in the night.  Young Jacob is actually a designer of furniture.  His first major present to Anna is a wooden writing chair which bears an inscription on its seat bottom from which the film's title is drawn.  The two meet in a college class taken by Anna in which Jacob is a teaching assistant.  As the semester ends, they exchange only meaningful glances, but Anna leaves a lengthy note on the windshield of Jacob's white Saturn that details her growing infatuation and concludes with the post script, "Please don't think I'm a nutcase."  Jacob thinks no such thing.  He calls Anna, who rushes her mother off the phone to take his call.  The romance begins in earnest in a coffee shop, in a brief scene which has a kind of awkward perfection about it.  The two nervously begin their courtship like two musicians trying to duet, adept and eager, but struggling to find the same key.

Alas, the inevitable musical montage follows, with scenes of bumper cars, toes in the sand and whatnot.  This the sort of thing which is supposed to carry the narrative forward and demonstrate the swoony rush of young  love.  But after the charming, halting realism of the previous scene, the montage sets Like Crazy back a bit, if only briefly.  It's as if director Drake Doremus' film has been invaded by a lesser, more obvious romance.   It's a regression that besets Mr. Doremus at interludes throughout Like Crazy, as if he doesn't trust what he's got.  So we see an overhead time lapse shot of the couple's bed, the change in body positions and clothes demonstrating the passage of time through Anna and Jacob's first expiring-student-visa-be-damned summer together; a shot of Anna at Heathrow after parting with Jacob, motionless as hours worth of travelers zoom around her like bees in a hive; that sort of thing.  There is, at least a judicious economy to these bridging sequences.  It's also an indication of Doremus' relative subtlety that the first, most romantic montage occurs  not to the accompaniment of insistent pop, but solo piano.

The flouting of the expiration of the student visa creates the major barrier to the progress of  Anna and Jacob's relationship.  When she tries to return to America, Anna finds out that our friends in Homeland Security  have little sense of humor in these matters, even for such an English rose as she.  She's been banned from the country.  Jacob rushes around the airport brandishing a bouquet of flowers like some ineffectual lance.  But there's no rescuing or even coming face to face with his damsel, who's put back on a plane and returned to Britain.  And here, the challenge for the young couple really begins.

Even when Jacob is convinced to travel to England and make with Anna the most legally emphatic of commitments, the heartless U.S. authorities will not budge.  Before that disappointment, and certainly after, we see the two growing apart, separated as they are by the thousands of miles, an ocean and their respective cultures.  There is also the matter of trying to establish careers.  Anna works as an assistant at a London magazine, where she works for sympathetic boss, Liz (Finola Hughes), while Jacob designs minimalistic wooden furniture in California. 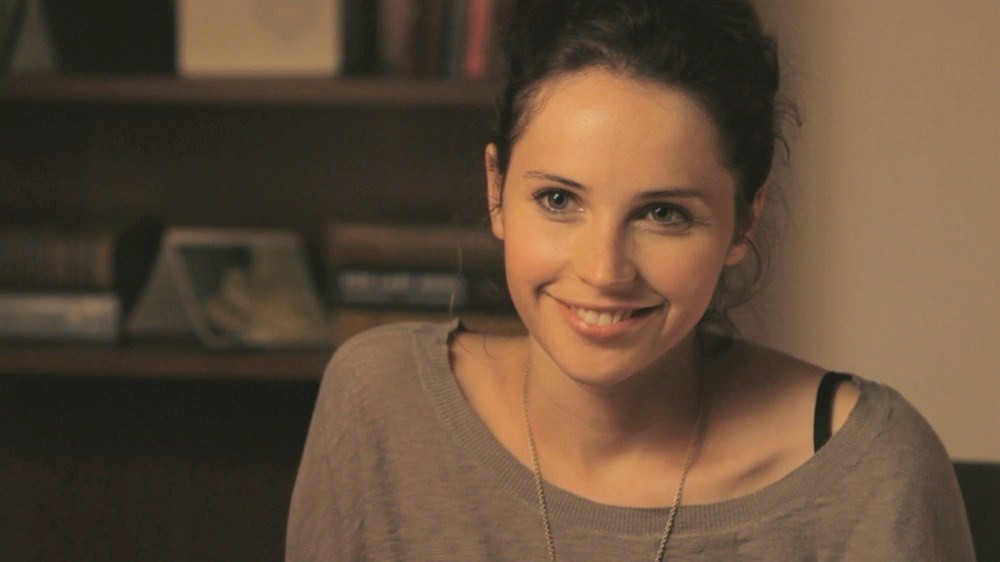 It is Jacob who most seems most affected by the separations.  This not simply a matter of letting his clean-shaven face be lined by a delicate, reddish moustache and goatee during their first period apart, making him look  a minor personage in a Dutch painting.  At some point after the setback at the airport when Anna is rebuffed by Homeland Security, Jacob's assistant in his furniture business, Sam (Jennifer Lawrence, Winter's Bone), becomes a live-in assistant.  Jacob might lack the fortitude or even the depth of feeling to make the difficult relationship work, but Anna ultimately strays as well when the situation looks hopeless, coupling with a neighbor, Simon (Charlie Bewley), an arrangement that Jacob had jealously (and hypocritically) anticipated.  The other man and woman seem devoted to Jacob and Anna for their part, and get the worst of the vicissitudes of the film's central relationship.

21st-century technology plays its part to both unify and divide; consistent with the tone of Like Crazy, it's more the latter.  With smart phones at hand or attached like vital organs, words can be exchanged between Anna's London bedroom and the Los Angeles dancefloor where Jacob finds himself at the same moment.  But the texts and broken conversations, along with accumulating voice mail messages, serve mainly to remind the pair of the distance between them.  When Jacob is in London with Anna, he checks for texts from Sam in California and vice versa.  Anna texts Jacob back in L.A. while an increasingly smitten Simon stands feet away.  So it goes for the on-again, off-again couple, technology offering the dubious ability to be both present and not present at once, an apt manifestation of their lover's quandary. Like Crazy's screenplay is credited to director Drake Doremus and  Ben York Jones, though much of the naturalistic dialog is apparently the product of improvisation between Anton Yelchin and Felicity Jones.  The story by Doremus and Jones, when not interrupted by montage, carries its young actors through a series of all-too-believable relationship ebbs and flows.  This occurs not simply as a result of separation, but just as strikingly when the Anna and Jacob are together.  There is the mournful air of a visit to Catalina just before Anna is due to return to England, a simple conversation about whether to get a meal while wandering aimlessly through an open-air market in London which becomes a quagmire and their most heated exchange within the cramped quarters of Anna's kitchen, some of those text messages on Jacob's phone a catalyst to the fight.  It's not always enjoyable to watch, but there's an integrity to the story and situations, enhanced by the give and take of Jones and Yelchin, both good in non-glamorous performances.  Mr. Doremus' shooting with hand-held digital cameras also keeps the visuals as real as the words, emotions ans situations.


Like Crazy does not delve, as its title might lead one to believe, into the dizzying realm of amour fou.   Nor  does it depict a more stalwart love, unshaken, even strengthened by its trials.  Unusually, for a film whose lovers are still so young, Like Crazy focuses on that oft-trying middle ground between the rush of love first expressed and the nebulous region of ever after.

"I don't feel young," says Anna to Liz, when her boss offers her the chance to write the magazine's blog, stating they could use a fresh, young voice.  By the time that Anna and Jacob have undergone the several separations, splits and reunions to which we are witness in Like Crazy, they do seem to have aged before our eyes.  The flesh is still young, but the spirits and ideals have taken a beating.  They seem, like young soldiers back from the wars, somehow older than their years.  This is expressed not just in dialog, but in the weariness with which it is ultimately spoken.  Anna returns at last to Jacob in California.  He offers to join her when she says she's going to freshen up with a shower.  She agrees.  The proposal and acceptance seem weighted more with obligation than passion.   The expression, or lack thereof, on Anna's face when they embrace in the shower speaks to a kind of last shot of The Graduate, "what do we do now" sort of blankness.  The immortal beginning of Shakespeare's sonnet 116 reads, "Let me not to the marriage of true minds admit impediments...."  As Like Crazy wisely demonstrates, the most daunting stage of young love might just be the point at which impediments fall away and it's just she and him and the rest of their lives.