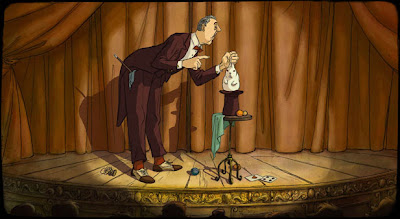 There is a lanky Frenchman, seen usually in an ill-fitting suit or trench coat.  One might characterize him as bumbling, but he's not without an antique, gentlemanly grace.   The occasional utterance can be heard en Francais, but little in the way of speech emanates from the genial man or those around him.  And he seems slightly at odds with the supposed progress of the world about him.  For those who have seen any any of the features of the great Jacques Tati, this will sound very familiar.   It should, as this animated feature by Sylvain Chomet (The Triplets of Belleville) is based upon an unfilmed script co-written by monsieur Tati.

We're taken into a theater in Paris, where the illusionist Tatischeff (Tati's actual surname) performs his routine to a sparse crowd.   Well, he tries - his rabbit has grown rebellious to an existence that involves no more than living in a cage and obediently emerging from a top hat once summoned.   It's the late 1950's and clearly the dying days of music hall, that form of our entertainment, like American vaudeville, which involved popular song, comedy and specialty acts.  Lest we forget the milieu, the words "music hall" are seen frequently in the early scenes of The Illusionist.

Tatischeff crosses the channel and performs in London.  He has to follow a band called Billy Boy and the Britoons.   The band, and particularly Billy Boy, their white-suited, writhing, pompadoured lead singer, has the largely female audience beside themselves.   The illusionist waits and waits for his turn.  When the curtain finally rises for him, we see but two people left in the audience, presumably a grandmother and grandson, the boy clearly wise to Tatischeff's old routine.   Rock and roll has arrived, a death knell for the likes of Tatischeff. The illusionist's declining fortunes take him all the way to the Highlands of Scotland, to one of the islands off the west coast of the country.  The locals are entranced by his performance, but even in those remote reaches, we see a garish jukebox rolled into the pub not long after his performance concludes.  Rock and roll keeps following him, as does Billy Boy, who later pulls into a garage where  Tatischeff has taken a job in Edinburgh, in his boat of a white Chevrolet.

Before he can depart for the mainland, the illusionist charms Alice, a young woman working at the inn where he's staying.   She's either simply drawn by someone who shows her kindness, or really believes Tatischeff can do magic, as when he produces a pair of new red shoes for her.   She follows him and the two ultimately settle in Edinburgh, in hotel that's something of a last port of call for music hall performers.  There's a troup of very peppy acrobats, a dwarfish square-headed ventriloquist and a very, very sad clown (I was reminded of Heinrich Boll's character of the same profession).

Tati's script apparently was set in Paris and Czechoslovakia, but Chomet chose to place most of the story in Scotland, where his Django Films studio is (or was) located.   Chomet seems to think The Illusionist (L'llusionniste) was a project that Tati hoped to film with his daughter, Sopie.  But some contend that L'llusionniste has more to do with the daughter that Tati abandoned, Helga Marie-Jeanne Schiel, the only child of the filmmaker who survives, living today in the northeast of England.   Whatever the case, the question does seem to illuminate the relationship of Tatischeff and Alice in the film, which is slightly ambiguous, but always chaste.

While Alice appears to be considerably younger than Tatischeff, its difficult to tell since Chomet almost always presents his characters, as did Tati, without close-up, preferring wide shots with plenty of room for action within the frame.   There's much less of the amusing close-up grotesqueries that were evident in The Triplets of Belleville.    As Alice blossoms in the big city and longs for the attention that Tatischeff can't give her, she meets and falls in love with a young man from their neighborhood.   The parting of Tatishcheff and Alice is reminiscent of the conclusion of Chaplin's The Circus.  It's also consistent with the melancholy tone that pervades The Illusionist.

What The Illusionist does share with Chomet's Triplets of Belleville is the same, sharp two dimensional, hand drawn animation.  Particularly impressive is the rendering of light and shadow.  There are several such sequences, including Tatischeff rising one morning in Edinburgh to exercise, light filtering through the window over the sofa on which he sleeps.   As he does knee bends, the beams of light and the strips of shadow are subtly displaced and slip back into place.  Edinburgh, an exquisite city to begin with, also fares well.  Most memorable is a panoramic shot that begins over the Salisbury Crags, sweeps over Calton Hill and withdraws to reveal the entire cityscape by night.

Chomet also composed the varied score for The Illusionist.  There's nothing nearly so catchy as "Belleville Rendez-Vous" from Ben Charest's score from the Triplet's of Belleville, but Chomet's music befits the sweet, melancholy mood.   There are frequent passages of Satie-like piano.

Less successful is the garage scene in Edinburgh when the illusionist has had to find work outside the theater.   Billy Boy pulls up in his big Chevrolet and poor Tatischeff struggles mightily with the tools of the garage and the controls of the automobile, a la Tati.  Much as Tatischeff bears the name and the look of Tati, this is the first time that the character has acted so blatantly in a manner for which Tati's monsieur Hulot became famous through four feature films.  The hand drawn animation in evidence here may allow for more naturalistic movement than contemporary methods, as some contend, but Tatischeff is not Tati.  I've seen Hulot, I've enjoyed Hulot... you monsieur are no Hulot.

A better Tati tribute occurs when Tatischeff sees Alice and her beau on an Edinburgh street and ducks into a cinema to avoid them.  On the screen?  A film, not animated version of the real Tati, starring in "My Uncle."

The garage scene also strikes a sour note with the appearance of Billy Boy.   Strangely, the singer is given the clearest utterances of all the characters in The Illusionist, buffoonish though they may be.   The implication is that the new music is simply loud, crass, a poor substitute for what it is replacing.   One of the most endearing aspects of Hulot was the manner in which he playfully jousted with all the tokens of the modern world, particularly in Playtime.   He seemed bemused, not sanctimonious.   The death of music hall does seem something worth mourning in retrospect, but the world would be a poorer place if not for the arrival of rock and roll, just as animation has stayed a vital art form with some of the stunning developments made in recent decades.

The Illusionist is best considered, best enjoyed, as its own creation, free of the shadow of Tati.   It's not a new Tati film as some suggest, it's a new film by Sylvain Chomet.   And a lovely, elegiac one at that. 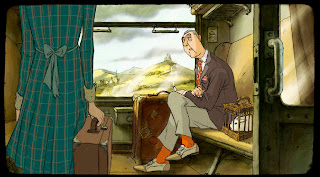