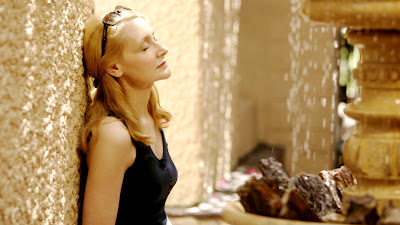 This slightly better than average East meets West love story is really more about Patricia Clarkson time than anything else.   Ms. Clarkson has been an ever more busy actress in television and films since the mid-80's.   Her natural beauty, sultry-ish voice and deceptive range have often made her the most interesting thing happening on screen, especially in otherwise disappointing projects like Pieces of April and Shutter Island (the edgier roles in both of those films demonstrating some of that range, in contrast to the kindly souls she often plays, as with her character in Cairo Time).

Here she plays Juliette Grant, a writer arriving in Cairo for a rendezvous with her husband.  Unfortunately, his UN job has him detained with refugee camp crisis in Gaza, so his long-time co-worker, Tareq (Alexander Siddig) collects her from the airport.  As days pass and the husband can't get away - there are only brief, increasingly frustrating phone conversations, occuring usually at odd hours - Juliette goes out to explore Cairo.   Walking alone as she does, a fairly striking woman in Western dress, she quickly attracts a curious, aggressive and unwanted following.   Confined between her lonliness and an elegant hotel version of cabin fever on one hand, and a foreign, forbidding environment on the other, Juliette seeks out Tareq in his cafe, where he is found playing chess in the male bastion, having reverted to a flowing galibayya from the more conventional (to our eyes) attire in which he collected Juliette.

The stage is pretty well set for some manner of romance between Juliette and Tareq.   It's just a matter of how it will happen and how far it will proceed.

Comparisons will, and already have been made to Lost in Translation.  There's certainly some common ground.  Both films have a dreamy, sleep-deprived langour about them.  Wives marooned in vast foreign cities, while husbands are drawn (or kept) away with work.  Relationships that develop out of boredom as much as anything else, deepening to something substantial and maybe even a bit life-changing, despite their fleeting nature.  A lack of predictable resolution in both cases.
Sophia Coppola managed to create a unique and parallel Tokyo universe in Lost in Translation, one in which the virtues of the environment are acknowledged only as quiet exceptions.  Here Cairo is allowed its seductions:   the obvious allure of the ancient sites, the mesmerizing voice of Oum Kalthoum, the initially intrusive but ultimately welcome call to prayer (After some time in the city, Juliette is asked if she's sleeping better.  She says no, but she doesn't really mind).    Overall, despite the performance of Ms. Clarkson and some lyrical moments along the way, comparisons between the two films don't really serve Cairo Time well.
Among the issues to be taken with the story by writer/director Ruba Nadda is the relative naivete of Juliette, surprised at the attention she draws on the street, or at seeing young girls working in shops and not at school.   This is supposed to be, after all, a woman of the world.   While this is her first visit to Cairo, her own experience combined with that of a globe-trotting husband undermines the credibility of her relative innocence.   There's a fairly gentle sparring between Juliette and Tareq, as Nadda is seemingly intent on pitting a feminist perspective against the more established old world patriarchy.   An admirably enough aim, but not something Nada handles with a light touch.   Wisely, matters of culture and politics (particularly the latter) are left in the background and the romance between Juliette and Tareq is allowed center stage and its own halting rhythm.


Ms. Nadda’s Arabness, particularly her facility with the language, apparently enabled her to talk her
camera into places never photographed for film productions, including the aforementioned cafe, the Al-Fishawi Coffee Shop, as well as the otherworldly White Desert.   The great pyramids lurk along the edge story just as they loom on the outskirts of the city itself.  When left only to its images of Cairo, the ancient and the chaotic, sprawlingly modern, Ms. Nadda's film surpasses the sometimes grinding mechanics of its story.


A kind of  consummation occurs between Juliette and Tareq, as they make an early morning trip out to Giza; Juliette had been "saving" the pyramids for her husband.   This follows an excursion to Alexandria to attend a wedding, one of the film's more forced sequences, both in the blue screen simulacrum of the train ride between cities and in the dialog along the way.   But Nadda follows that with one of the story's most elliptical, graceful turns.   Juliette and Tareq return to her luxurious hotel room, presumably to sleep together at last.   But with just a few words of dialog, they instead repair to the pyramids at sunrise. Perhaps leaving the would-be lovers there would have been too romantic.  The long-absent husband abruptly returns and reality breaks as clearly and inexorably as the harsh Cairo daylight.   A subsequent cab ride back to Giza might have been a good place to end the film, as Juliette's sadness is made manifest, sitting next to her husband but emtionally miles away.   The last scene seems tacked on and equivocal.   Better to end where the Cairo Time succeeded most:  with the graceful performance of its star.

Emerging from the Cairo airport disoriented and jet-lagged, transported by the beauty about her as she explores the city, weeping in her hotel room or in that taxi cab toward film's end...these among the variety of moods and emotions through which Patricia Clarkson moves apparent ease. 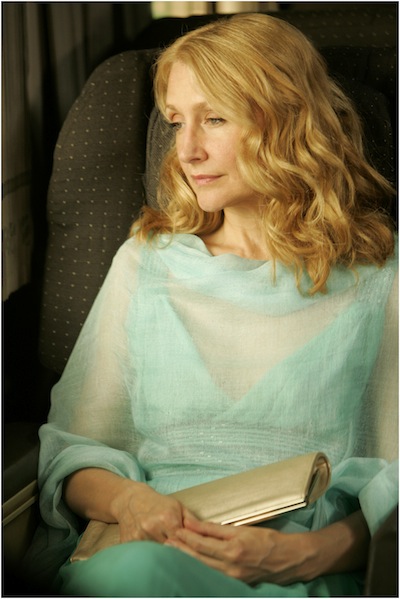