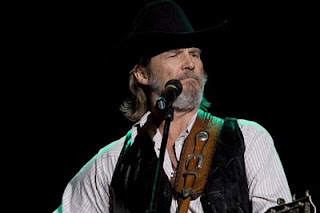 As Bad Blake says to his much younger paramour Jean Craddock while lying on her bed and picking a tune on his acoustic guitar, the best songs are the ones you’re sure you’ve heard before. So it is with Scott Cooper’s first directorial effort, Crazy Heart. There’s little new in the tale of this grizzled, bourbon-soaked country singer scuffling after long-sought success, often despite himself. But sometimes an older singer’s voice can often no longer distinguish itself so much with its overall quality as in its ability to squeeze a great deal of feeling out of a particular note.  Crazy Love is a tune we’ve heard before, but many of its notes ring resonant and true.

Certain older performers, whether through age itself, hard living, or a toll-taking combination thereof, assume an almost elemental appearance. Jeff Bridges’ Bad Blake, face deeply ravined, sunglasses over the rings and wrinkles about the pale fire of his blue-grey eyes, a snowy growth of beard over weakening chin, seems drawn from the same mountain range that might have produced the likes of Waylon Jennings and Kris Kristofferson.

Bad Blake is a half-feral presence at times, a man who has spent too much time in his own company, usually communing with a bottle of whiskey. We see him first pulling into the parking lot of a bowling alley in his appropriately rust-colored ’77 Suburban. He gets out of the truck, top button of pants undone and belt open - this a sartorial rule more than an exception with Bad - curses this particular nadir of his career and then removes a bottle from the vehicle with which he douses the nearby parking lot, the accumulated urine from his most recent long drive between shows.

Bridges inhabits the body gone to seed believably, just as he credibly evinces the well-worn charm with which Blake has obviously gotten by for years. His carriage is slightly stooped, his walk just a little unsure (even before an accident that results in a broken ankle and a pronounced limp), his torso has gone flabby, but he sometimes lolls about with the abandon of the once-lean kid he probably once was. If you haven’t yet lived long enough to have the realization yourself, ask someone older: you look in the mirror sometimes and are shocked at what you see; you still feel like the same dumb kid you’ve always been, but there’s an old person staring back at you. Bridges’ Blake in moments of reflection has that slightly stunned look about him.
But as he says late in the film, there’s still a little gas in the tank. We see glimpses of the performing and song writing talent that won him fans. The songs, co-written by T-Bone Burnett (who has become something of an American Virgil, guiding unsure directors and singers through the murky but rich depths of American roots music) are just good enough to seem the comfortable standards they’re supposed to be. And Bridges is proficient enough playing the acoustic guitar or Blakes’ beloved Fender, and provides enough vocal personality, to bring it off. 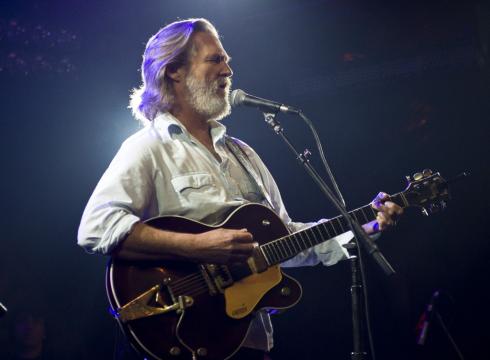 There is also a telling display of the convergence that often exists between actual talent and the cult of personality. We’re all drawn to talented people and will often forgive them quite a lot if their art reaches us. During that initial bowling alley concert, Blake dedicates a song to a husband and wife, but then is too drunk to start the vocal, leaving his young backing band to fill in. We seem him stumble outside, vomit into a trash can, retrieve his sunglasses from the unsavory contents of the same receptacle, stumble back in, sit down for a moment and finally join in for the final notes of the song. The small but appreciative crowd cheers him without much reservation. A woman who had disappointedly watched Blake stagger out, smiles at his less-than-heroic return. After the abrupt end of the show, the film cuts to the next morning, and the same women is in bed with Blake. He stirs quietly, grabs his clothes and the meager remains of a bottle of liquor and creeps out of the hotel room. It doesn’t take a lot of imagination to conjure images of drunken, less-than-idyllic lovemaking; it’s also easy to imagine the woman remembering the encounter fondly.

Blake’s talent also draws in a much younger woman, the aforementioned Jean Craddick, the journalist niece of his piano player during a two-night stand in Santa Fe. Their relationship begins as a rare interview granted as a favor to the piano player, but by the second night the two are lovers. Jean, the mother of young boy, knows better and often challenges Bad, but goes forward anyway. While the two never sing together, the relationship plays out like a doomed country music duo. Despite her beauty and vitality, Jean fares no better in keeping Bad on the straight and narrow than Tammy Wynette with the hard-drinking George Jones or Emmy Lou Harris with the late Gram Parsons.

Maggie Gyllenhaal has earned her Oscar nomination playing Jean. While Jean’s face is every bit as smooth as Bad’s is weathered, her eyes clear, sometimes like two beautiful blue half-moons gazing up at Blake for some clue in his expression, the young mother obviously knows suffering as well. Gyllenhaal manages to create a character of both vulnerability and strength, no mean feat. She’s excellent.

Robert Duval is also a welcome presence as Wayne, a Houston bar owner and long-time friend of Blake. Duval (who like Bridges and Burnett has a producer credit as well) provides a link to his own turn as an alcoholic country singer in Tender Mercies, for which he won an Academy Award in 1983.

But it’s Bridge’s show. The film chooses to conclude on a somewhat unlikely bit of uplift – these stories don’t usually end well – with Bad having straightened himself out after having lost Jean for good. But it’s in the quiet, often desperate moments of Bad Blake’s life that the film really finds itself: the pathos of a man late in life unable to afford a bottle of liquor (never mind his addiction to the same), scanning the shelf from a fifth of his favorite brand to a pint of the cheapest bourbon; crying out in frustration after finding himself prostrate on a bathroom floor for the thousandth time, having just vomited yet again from excessive drink; even relatively contented moments lying back with a guitar, working out a song, lost in the process. The plot of Crazy Heart falls into a pretty forgettable melody, but those quiet notes linger.